November 2020 During Covid this wonderful young company have rehearsed and are ready to present The Circle of  Virtues: A Morality Play by Hildegard of Bingen.
I have added two of my poems telling some of the background story of Ordo Virtutum said to be the first morality play by a woman in Western musical repertoire. Ordo Virtutum is really an allegorical morality play or sometimes called a liturgical drama composed by Hildegard in 1151 AD 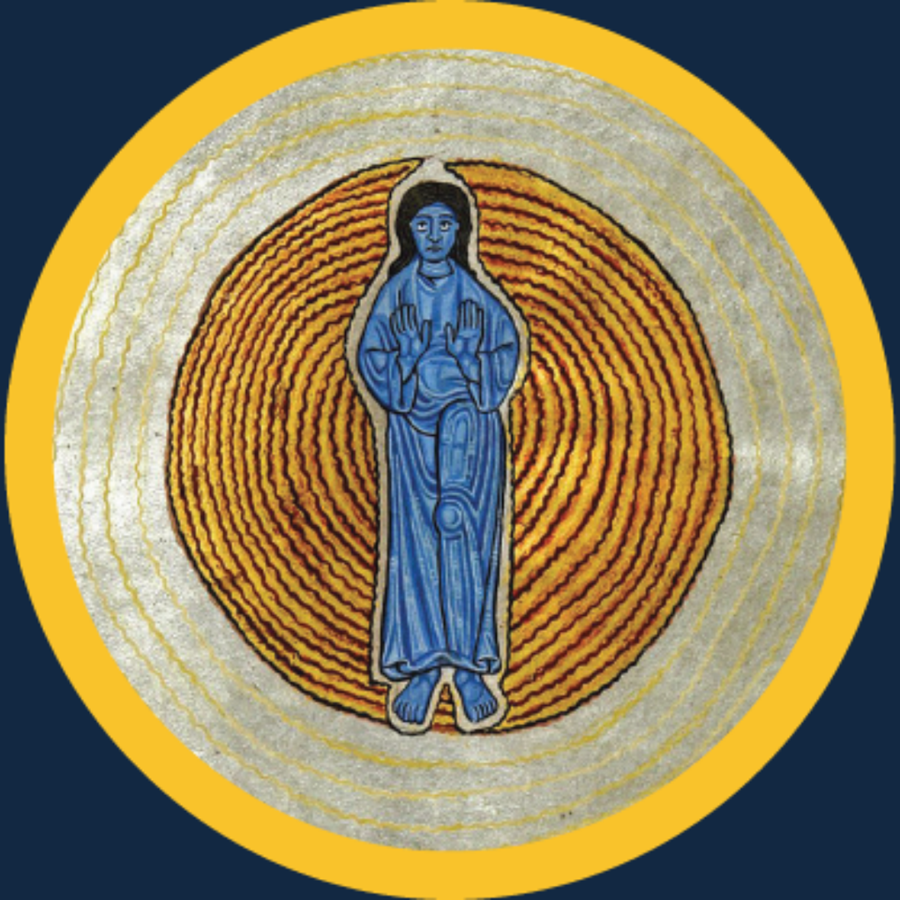 The Song Company presents
Circle of Virtue by Hildegard of Bingen

The Song Company invites vocal music lovers back into concert halls in Newcastle, Wollongong and Sydney as they present Ordo Virtutum (Circle of Virtue), the oldest surviving music drama, by 12th-century visionary, Hildegard of Bingen.

One of the earliest-named composers in Western musical history and outspoken in her dealings with princes and popes in mediaeval Europe, Abbess Hildegard of Bingen (1098-1179) created the earliest-known opera or music drama, Ordo Virtutum (c.1151), for the female inmates of her Abbey at Rupertsberg.

The fight for the salvation of the Soul (Roberta Diamond) by the Virtues (led by their Queen, Jessica O’Donoghue) from the Devil (Koen van Stade) is set to the most sumptuous chant for women’s voices for which Hildegard is known, and accompanied by drones, medieval organ and other atmospheric effects.

Be excited for an evening of wonderful music combined with a transcending and atmospheric stage presentation.

Circle of Virtue is the perfect way to support your national vocal ensemble’s return to the stage and to experience Australia’s finest vocalists in live performance. A few poems from my recently published book

Hildegard of Bingen: A poetic journey by Colleen Keating

In a vision
Hildegard has her sisters
sing as personified Virtues
in song and action.

She sees struggle
against the devil,
visualises it played out as drama.

Volmar can take the part of the devil.
He will not sing, she ponders aloud.

All abuzz, she hastens to tell Richardis.
With Volmar as scribe
they create their first opera.

Hildegard writes the words and notes,
Richardis plucks the psaltery
sings softly,
her radiance caught in a stream of light

Their eyes catch
mirror harmony of purpose.
Hildegard’s thoughts drift back
to the eight year old Richardis,
who looked to her as mother,
and the one
whose tender hands held her,
cared for her, in her sickness.
Now at twenty two a grown woman.

An early spring afternoon
illumines vividness of robes and gowns.

Hospitality of the new Abbey
welcomes lively entourages,
Bishops, Priests, monks, dignitaries, clerics.
The Marchioness Von Stade,
a rare visit to her daughter at Rupertsberg,
and the largest audience
ever seen in Bingen arrive.

After the Bishop’s blessing of the Church
Hildegard and her sisters,
walk, poised and noble
in splendid procession
down the aisle in long flowing gowns of silk
singing glorious, heavenly music.

They circle the altar
dazzling brides of Christ,
singing their opera,
a morality play,
virtues triumphant, vices subdued,
the struggle of the human soul
with the wiles of the devil.

When the sisters harmonise in a chorus
and Richardis sings the solo
to end the opera
tears fill her eyes,
she bows her head.

After Vespers that evening
the last meal before Lenten fast
their excitement and pride is palpable.

Admonishment rains down like the Rhine
after a snow melt.

Outside her window the oak resists the wildest storms.
Hildegard stands defiant,
against all criticism.